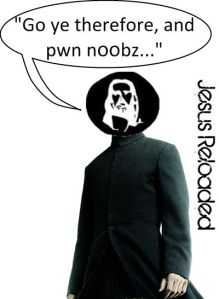 When I was in New York City last weekend, One of my roommates at the hotel received a tiny little tract from someone on the street that had a big smiley face and the words, "Smile, Jesus loves you" on the front.

God gave me the opportunity to talk to my roommates about it, but I let fear have too much of a foothold and the discussion never went past what they thought of the tract itself. One of the things they said, though, has remained with me: "...I dunno. I've definitely heard better arguments for [Christianity] before." That brings up to issues: one, that the choice for Christ over the world and other religions is comparative to picking the right flavor of chips for youth in this day and age. Two, that we as evangelicals have lost perspective of what we're dealing with: the Good News of the cross and the gravity of souls plunging into Hell forever.

For my friends, religion is something as if from a video game: something you pick out from a list to give you benefits such as control of the undead and self-healing auras. The Devil is indeed crafty, and has been quite successful in hiding the enormous importance and value of the human soul. This is not a game; we are given a tiny little life in history, and then we die and enter into eternal suffering or praise of God. We don't get three lives or checkpoints we can go back to after we get Game Over.

Jesus isn't a religion. You don't get a +3 armor aura when you ask Him into your life. Instead, you come to Him weak, destitute, destroyed by sin, and aware of your own nothingness. He gave His life for us on the cross; we give our lives up to Him. He doesn't make your life make your life easier, but instead by following Him you are agreeing to take up a cross and carry it for the rest of your life. Before the Devil just whispered reassuring lies into your ear, but now that you follow Jesus he throws his army of darkness at you. Jesus is commitment, Jesus is a relationship with God; Jesus takes work. But Jesus is not just another brand of religious chips.

The second issue is actually the same one in different clothes. Satan has hidden the enormity of what we do, and instead it just becomes another ministry. Making disciples of the nations is not just "another ministry," it's the GREAT COMMISSION. This is the thing that was of such utmost importance that it was the last thing Jesus told us while on earth. This is the command of Jesus, who holds the fabric of the universe together. This is no trifling matter.

So getting back to the tract, I must say "Sure. Jesus makes me smile." He should make you smile too. Because of His grace I will not be burning in utter torment for hundreds and thousands and millions and billions and trillions and... forever. But come on; let's get real. You're not handing this tract to a four year old child, you're handing it to an adult. Let us not be afraid of the truth or presenting in its full splendor unadulterated by our own additions and modifications. Let's not dumb down the gospel to corny and cliche sayings with cute illustrations. "God will not be mocked" (Galatians 6:7).

This is God we're dealing with. Your creator and sustainer, Lord and Savior. Savior from what? From the everlasting pain of Hell. Those are unsaved souls who will be tormented forever that we're dealing with. Let's get serious about what we do and see a massive revival for the Kingdom of God.