The Sacrament of Evangelism (book review) 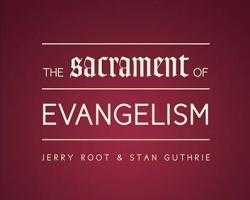 Evangelism. The word, as a general rule, strikes a note of distaste into everyone's hearts. Christians hate doing it and non-Christians hate when Christians do it. So whether we admit it or not, the truth is that most of us Christians figure out spiritual-sounding reasons for why we don't share the good news of great joy with those who need to hear it. "It's not that I'm not into evangelism, it's just that I'm more into relational evangelism. You have to have a relationship with someone before you can talk about Jesus with them, and that takes time!" That's what we say to alleviate our feelings of guilt for not sharing the gospel with people that we don't know well. "Preach the gospel at all times and if necessary, use words, man." That's what we use to justify why we don't ever talk about Jesus outside of our super-safe small groups. I don't disagree with the actual content of those statements too much, but the problem is that I've seen myself and others use them all too often as little more than excuses.

To be clear, I'm not trying to set myself up as a judge over my fellow Christians. I wouldn't even really consider myself much of a gifted evangelist, but I have had ample experience sharing the gospel in a wide variety of contexts and I'd like to think I've learned a lesson or two along the way. Lesson 1: evangelism just plain kind of sucks for the first 500 times you do it. It's rife with fear, rejection, and competition until you begin to get your sea legs for it. Lesson 2: evangelism is just plain awesome if you can do it in full remembrance of who you are in Christ. If I know that my self-worth is found in Jesus and only Jesus, then rejection loses its sting. If I know that I am fully loved by Christ and that nothing I do/don't do can change that, I lose the motivation to get notches on my belt and the only reason left for me to do it is to share the hope I've found. But there was one lesson I had never realized in all my evangelistic experiences before: evangelism is not about convincing or converting: it's about seeing God demonstrate his power a la 1 Corinthians 2:1-5.

Authors Dr. Jerry Root and Stan Guthrie explore this concept throughout their book, encouragingly reminding us that God is not asking us to use evangelism to invite others to church; on the contrary, God is inviting us to come with him in evangelism and see him work. They describe a sacrament as a mutual effort of us humans responding to God's presence, and so the overarching point of this book is not to offer Christians some new method of evangelism or a surefire tool to convert lots of people. Instead, they simply offer a new way of looking at evangelism that is simultaneously less frightening and more joyous. The book is broken up into four sections of five chapters each, and intentionally remains fairly theoretical until the very last section.

The first section lays a groundwork for the Christian who doesn't have much experience with evangelism and gently sets itself up as a guidebook for the journey of becoming a more faithful evangelist rather than a textbook for evangelistic theory. In addition, the book is seemingly intended for use in a small group study and has discussion questions at the end of each chapter.

The second and third sections get a bit more philosophical/theological as the authors first seek to remind us of our identity and position in Christ and then give us deeper philosophical connections that you could make with a non-Christian to help them draw closer to Christ. In my opinion, these sections are the greatest strength of the book. People come searching for truth at all levels of philosophical abstraction from the very practical ("You're saying God won't let me have sex with my boyfriend?") to the incredibly abstract ("Shouldn't we reject the plausibility of religion, given its lack of empirical evidence?"). Having an apologetic background for when you're hit with those questions can be quite helpful in dismantling barriers, but usually leaves you in a reactional position.

The authors seem to sense this and offer a way to play a more initiative, active role by having a conversation about the longings we all feel and using it for bridge-building to get to Jesus. If you can help a person understand their own unmet need poignantly enough, you usually don't have to fight very hard to get to the gospel. And how do we do that? We listen: "Those who are genuinely interested in others often gain a hearing for themselves. We will need, of course, a growing understanding of the nature of life. We cannot effectively talk with others if we do not have something worth saying" (140). This isn't some sort of reverse-psychology ploy to get people to listen to us. We listen because we actually do care. What I personally found most impactful from the book was a quote from art historian Hans Rookmaaker: "Christ did not come to make us Christian; He came to make us fully human." In other words, we don't have to be recruiters or salespeople! How freeing is that?

The last section aims to be helpful in a very "how-to" sense, giving advice about what to talk about and how to follow up with new believers. I would recommend the book to anyone who is frustrated with what evangelism is to them right now, but I do have a few reservations. First, while I think the overall concept of viewing evangelism as a sacrament is brilliant, the writing doesn't really do it as much justice as it deserves. The first third of the book isn't edited well and feels awkward and stilted to read. The fact that there are two authors adds to the awkwardness--every time they introduce an illustration or example, it's prefaced with "One time Jerry did..." or "In Stan's experience..." which makes it feel distant and second-hand. The intended audience of the book seems as unclear as the authorship. Before I opened the book I thought it was aimed at people who had no experience in sharing the gospel, but then in the first section they say, "You can always find faithful stalwarts willing to step out in faith to share the good news. (Because you are reading this book, you may be one of them.)" None of these are major critiques, but they dulled the sharp end of the book.

My one major critique with the book sits on a philosophical difference of opinion: "Ultimately we are called not to be active, to be fruitful. Fruitful disciples not only actively tell and demonstrate the gospel, but they also see people respond to both the message and the messenger" (71). I personally believe the exact opposite: that we are called to be faithful ("active") stewards of the good news we've received, but that Christ is the one who is responsible for saving people. Not us! To say that we're culpable for seeing people be saved when we can't actually save them seems utterly insane. Not only that, but it sets up an unspoken quota that determines whether we're fulfilling our calling or not. If I preach the gospel every day into the lives of my non-Christian friends, and I do everything I'm "supposed to" and yet I don't see any of them respond then I must conclude that I'm a failure and not living up to my calling. If I only lead one person to Christ in my life, then I'm also a failure since they say I'm supposed to see "people" (plural) respond. That being said I think you likely will see people respond if you're faithful in sharing the gospel, but to guarantee it if you're doing it right stinks of works-based religion that steps beyond scriptural command. I used to feel such pressure and so I would press non-Christians to pray to receive Christ even when they still seemed pretty unconvinced in their hearts that Jesus is Lord, just so that I wouldn't feel like a failure.

Even though it was just one sentence in a whole book, it taints the whole in my humble opinion. I'd still recommend it, but not as heartily as I want to. You can find it at Amazon for $11.

_DISCLAIMER: I received a copy of this book from the publisher for the purpose of this review.