When Half Spent was the Night

This Advent season I've been musing on the unexpectedness of the arrival of Christ. It's really quite curious that God should find it fitting to come to earth as a screaming, wriggling, blood-covered baby who couldn't even hold up his own head. It seems to defy any logical course of reasoning that he would pick the putrid scents of decaying cattle manure and the discomforts of poky hay to be born amid. Yet I couldn't help but realize this morning that his coming was even more unexpected to the average Second Temple Jew than I had previously been able to imagine. 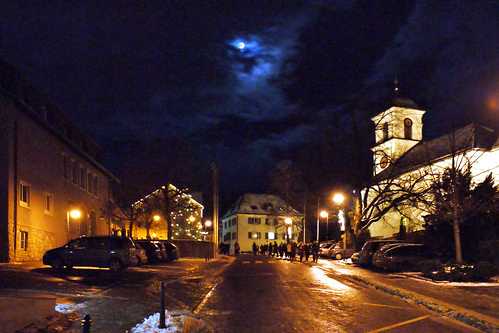 Though the Apocryphal books are not considered scripture within the protestant tradition (and rightly so!), they are nonetheless instructive regarding Jewish thought in the centuries between the Old Testament and the New. In The Wisdom of Solomon the classic story of the Exodus is recounted, though in an undoubtedly more mystical and spiritualized way. Listen to the way in which the tenth plague of Egypt is retold:

All things were lying in peace and silence, and night in her swift course was half spent, when your all-powerful word leapt from your royal throne in heaven into the midst of that doomed land like a relentless warrior, bearing the sharp sword of your inflexible decree; with his head touching the heavens and his feet on earth he stood and spread death everywhere. Then all at once nightmare phantoms appalled the godless, and fears unlooked-for beset them; flinging themselves half dead to the ground, one here, another there, they made clear why they were dying; for the dreams that tormented them had taught them before they died, so that they should not perish still ignorant of why they suffered.

The godly also had a taste of death when large numbers were struck down in the wilderness. But the divine wrath did not long continue, for a blameless man was quick to be their champion, bearing the weapons of his priestly ministry, prayer and the incense that propitiates; he withstood the divine anger and set a limit to the disaster, thus showing that he was indeed your servant. He overcame the anger neither by bodily strength nor by force of arms; but by words he subdued the avenger, appealing to the sworn covenants made with our forefathers. The dead were already fallen in heaps when he interposed himself and drove back the divine wrath, barring its line of attack on those still alive. On his long-skirted robe the whole world was represented; the glories of the fathers were engraved on his four rows of precious stones; and your majesty was on the diadem upon his head. To these the destroyer yielded, for they made him afraid. It was only a taste of the wrath, but it was enough (Wisdom of Solomon 18:14-25, REB). You can imagine the heavenly choirs singing "Silent night, holy night, all is calm, all is..." and then God's "all-powerful word" jumps off his throne and reaps mass destruction and devastation. This sounds more like Kill Bill than your average nativity story. Though I'm not suggesting that this passage is talking prophetically about the appearance of the Messiah, it does illuminate for us what people generally thought God's appearance among us was like. How odd that the Christ came, not as a whirlwind of fury and death, but as a suffering servant.

I included the second paragraph there as well, because its retelling of the peoples' sin at the base of Mt. Sinai and Moses' ensuing salvation of them bears unmistakable theological overtones. The author here clearly portrays Moses in a much more familiar casting of a Messiah figure. Is it not intriguing that he was "blameless," "bearing the weapons of his priestly ministry, prayer and the incense that propitiates," a "servant," overcoming God's anger "by words, appealing to the sworn covenants," representing the whole world "on his long-skirted robe," "interpos[ing] himself" before the divine wrath, wearing God's majesty as a crown, conquering the destroyer? As I said, Moses seems to be much more in line with what Christians think of as a Messiah than God's "all-powerful word" who conquered the Egyptians.

There seems to be very little room in the author's world for a Messiah who was also God himself, for a servant who would save God's chosen people yet who would also be himself the conqueror of death. This Christmas let us rejoice in our God who became a man, who at once interposed himself on our behalf to save us from himself while remaining perfectly just in his mercy by not allowing evil to live. Let us give thanks that he overcame God's righteous wrath not by "bodily strength nor by force of arms; but by words," for we must admit that we would've deserved such wrath. Let us give thanks that the whole world was on Jesus' robes, and that we who should have been destroyed instead find an interposing, propitiating priest who stands to save us. How incredibly, wonderfully unexpected!