Long Before Luther [A Review] 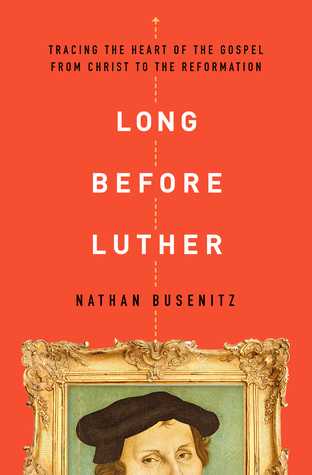 "Was the Reformation doctrine of justification by faith alone an invention or a recovery?" Though Protestants might easily dismiss that question, it would be foolish to do so. The Roman Church asserts that this doctrine that is so central to Protestants is an innovation, and that we have thus been living in error for the past 500 years and need to return to the straight and narrow path found only in Mother Church.

It does not help, of course, that Protestants (and especially evangelicals) can sometimes act as if the modern Church just sort of appeared out of thin air without caring one bit where it came from. Slightly better (but only slightly!) is the belief that the true Church only arose 500 years ago when Luther posted his theses. This is not, however, how any of it works: we came from somewhere, and in one way or another we must reckon with our history.

In a peculiar and ironic way, this narrative of Church History is one that the 16th century Reformers like Luther and Calvin and Zwingli would themselves reject. While they did believe that there was corruption and theological infidelity and corporate sin in the Church that needed to be repented of, this was not a task of reinventing the Church or starting a new Church; their aim was to come back to the historical teaching of the Church. As Fred Sanders has recently put it, they intended to be more catholic than the Roman Church would allow them to be.

It is thus with great pleasure that I learned about Nathan Busenitz's new book, Long Before Luther: Tracing the Heart of the Gospel From Christ to the Reformation. There have been hundreds of books published this year in honor of the 500th anniversary of Luther's theses, but this one stood out to me precisely because it works so powerfully to confront this false notion that the true Church was dormant or dead until the 16th century.

Busenitz focuses in specifically on the doctrine of justification by grace through faith with the intention of refuting the Roman Church's claim that it was an innovative doctrine, having no historical precedent. He begins by looking at the scriptural warrant for the doctrine and then proceeds to examine the doctrine in theologians before Augustine, in Augustine himself, and then in later medieval theologians such as Anselm and Bernard of Clairvaux.

Throughout the whole book Busenitz stays rooted in primary sources, only leaning upon secondary sources to supplement his interpretation or to interact with others who read the sources differently than he does. Given that Busenitz holds a doctorate in church history and patristic theology, the section on the pre-augustinian Church and on Augustine himself are much stronger than the last section on the post-augustinian Church. That's not particularly a bad thing, but it's worth noting because there is certainly far more that could have been said about the medieval period than is spoken of here.

Let me reiterate that I am so deeply thankful that this book has been published; Protestants could stand to have a lot more books like this on our shelves. That being said, I see two primary areas where this book could have been considerably strengthened: its doctrinal focus and its engagement with detractors and critics.

Doctrinal focus. In one sense, one has to commend Busenitz for his laser focus on a single doctrine for an entire book-length project; it would be easy to go a mile wide and an inch deep, and because he doesn't do that he is able to interact extensively with primary sources. That's pretty rare in popular-level evangelical books, and it's wonderful that he does so.

Nonetheless, justification by grace through faith is not an adequate summary of everything the Reformers were trying to accomplish, and focusing only on this one doctrine exposes Protestants to the criticism that we only care about getting people saved without investing much thought into the life and function of the Church, and how individuals fit into the whole. Yet for Luther, Cranmer, Calvin, and the rest, the doctrine of soteriology was only part of the project of reformation.

In the medieval point of view, what distinguished the true Church was apostolic descent (can we trace a spiritual genealogy all the way back to the NT?) whereas for the Reformers the true Church was marked by the right preaching of the Word, the right administration of the sacraments, and, for the Reformed at least, the right exercise of Church discipline. Right preaching of the Word came from the ad fontes impulse to dig back down to the primary sources rather than relying on millennia of interpretations instead. They weren't abandoning Church history, but they were returning it to its proper place. Long Before Luther expressly does not intend to tackle all of that, but I cannot help but feel the book is a bit lopsided as a result.

Engagement with detractors and critics. Having only relatively recently begun to dig into patristics and reformation theology myself, I am in no way qualified to make judgments about whether Busenitz interprets the sources fairly or not. I imagine that most readers of this book will be in the same boat, and for the most part we are required to simply trust that he is not just lifting quotes out of context and using them as proof texts. That's a scary place to be as a reader, and I imagine his case would have been rhetorically strengthened had he engaged opposing viewpoints more thoroughly.

To be fair, he does do some of this: on p. 25 he uses Alister McGrath's contention that sola fide is an innovative doctrine as a springboard to get into his argument. In the section on Augustine he gives ample time to the argument that Augustine believed in sola caritate iustificare ("justification by love alone") rather than by grace through faith alone. Given that the entire book is a defense against the accusation of theological innovation, though, I would have hoped to see this sort of interaction throughout more of his argumentation. This would have also increased the size of the book, but it would have been worth it.

It's a rather short book weighing in at just over 160 pages minus notes and appendices, and seems to be targeted at the armchair theologian; it's not as technical as historical theology can get, but I could imagine it going over the heads of some readers who have never read much in this vein before. My criticisms aside, I really do appreciate this book and Busenitz's zeal to see a Protestant Church more connected to and grounded in its own history.

You can pick up a copy on Kindle for about $9, or you can purchase it from the publisher for roughly the same price.