God and Galileo [a review]

Faith vs. Science: from nearly every vantage point, there is some degree of tension between the two. Like oil and water, they just don't mix. To some, the answer to this "tension" is obvious: faith is a weird hobby you do in private like designing intricate LARPing costumes or browsing obscure subreddits, but nobody in their right mind would suggest our weird hobbies ought to inform policymaking decisions. To others, the answer also seems obvious: science is good and honoring to God except for when scientists construe evidence to contradict the Bible, in which case the Bible's authority wins. Many see the root of this tension stretching all the way back to Galileo in his fight with the Medieval church over Copernican heliocentrism and whether the earth orbits the sun or the sun orbits the earth. And yet according to Ecclesiastes 1:5, "The sun rises and the sun sets, and hurries back to where it rises" (NIV), and in Job 38:4 God takes credit for laying the foundation of the Earth. How could anyone who claims to believe in the authority of the Bible be a loon enough to suggest that it was the earth that moves rather than the sun? 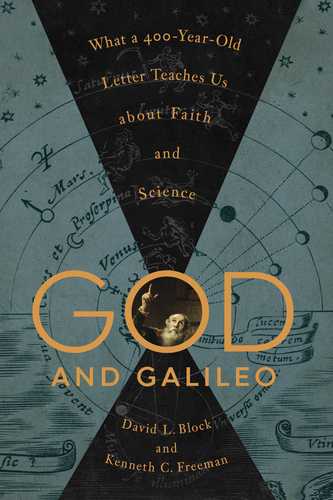 In their new book, God and Galileo, astronomers David Block (University of Cape Town) and Kenneth Freeman (Cambridge) dig into this tension between what they call "The Book of Nature" and "The Book of Scripture." Their aims are threefold:

Block and Freeman do a great job from the outset of reframing the debate around "who controls the access to the wells of truth" (23) rather than about which celestial body orbits which. To wit, if the Church allows the Book of Nature to overrule the Book of Scripture, there would be an immediate crisis of authority. Things get very messy when there is more than one source of truth, and so quite naturally there was quite a pushback to Galileo's statements.

This way of viewing things is problematic in two ways, though. First, it assumes Scripture is self-evident, as if merely quoting the text somehow losslessly transfers its meaning into the hearer's brain and thus settles any debate. This is simply not the case: all written texts are interpreted texts, and that is doubly true for texts written in different times and cultural settings. Second, it assumes scientific inquiry to be a static (rather than dynamic) knowledge, and this is also not the case. Hypotheses and theories and laws are contextually situated models of the material world around us, and when we receive new experimental data, those models sometimes are refined and sometimes must be entirely abandoned. We love to call those theories we agree with "facts" so as to imply a greater sense of authority, but this is a rather dishonest thing to do. They may be facts within the models of reality that we ourselves have constructed, but we ought not kid ourselves that our models of reality are equivalent to reality itself, or that we have a perfect knowledge of the Universe as it is.

Once we rightly understand that both holy texts and empirical data must both be interpreted, we can begin to make headway in finding resolution to the dilemma of faith and science, argue Block and Freeman. They quote St. Augustine to this effect: "If physical facts are clearly demonstrated and appear to be contrary to the Holy Scriptures, then the interpretation of what is written in the Holy Scriptures may be concluded without any hesitation to be quite false" (76). Note that this luminary father of the Church is not suggesting scripture itself is corrected by nature, but that our interpretation of scripture is. Block and Freeman fight fair: this is a corrective both to overzealous Christians that their interpretations may not always be correct, as well as to overzealous scientists who believe "the data speaks for itself," blind to their own interpretive work on that data or who fail to remember that a new data point in the future might skew the trend line.

This is where the authors are at their best: reconciling faith and science by putting the onus of the tension on our own incomplete, fallible knowledge of faith and science. They also do a good job of expanding the list of Things Worth Knowing™ out past the confines of scientific empiricism, given that the axiom "Only empirical knowledge is valid knowledge" is not itself empirically provable. I found this to be an immensely encouraging aspect of the book; those in STEM fields only rarely have this sort of humility to admit the validity of knowledge, learning, and wisdom of other disciplines.

The book takes a perplexing turn in Part 2 ("Historical Vignettes") when, with basically no transition, the authors tell a story about their search to find if any glass factories in Venice still exist whose family histories trace back to the time of Galileo. Part 2 contains two other historical vignettes tangentially related to Galileo and the Church's stance toward astronomy and science in general.

Shortly thereafter is another jolting transition from Part 2 to Part 3 ("Personal Experiences of Grace") where the authors speak to the more existential questions of the lived experience of walking by faith in the empirical world of science. Theoretically, these two turns make sense: faith-vs-science is not merely an interesting analytical problem to be solved, but a history to be told and a way of life to be lived. Practically speaking, though, the flow and organization of this book feels random and unclear, at least to me. Parts 2 and 3 feel much more like appendices to the book rather than chapters contributing to the thesis, or like a rough draft. Were this a collection of essays, the lack of cohesiveness would be more defensible, but as it stands it doesn't fit together very well.

In general, the book seems to me as if it tries to accomplish too many things for too many people. It's a shame, because Part 1 really is fairly well-argued and thought provoking. Perhaps if Parts 2 and 3 had been stirred into the batter of Part 1, the overall cake might've tasted better.

Block and Freeman start out really well and raise some fascinating ideas, but I just could not see myself recommending this book to those wrestling with the truth claims of Christianity. It took me a couple weeks to try to understand what it was they were arguing for! Their analysis of the books of Nature and Scripture and the issues of authority between them was great, but ultimately the book felt like it didn't know what it needed to be.