ESV Bible with Creeds and Confessions [a review]

When I was a teenager I had an NIV teen study Bible that had pull quotes, notes interspersed in the text, and then a few articles in the back answering questions that teens might ask. It was very helpful for me, and it introduced me to the concept of Bibles with study material. When I was in college I saved up and bought the infamously massive ESV Study Bible and it served me well for years as I grew in familiarity with the biblical text and in my understanding of theology.

We are nearing the point where there are more kinds of Bibles in the world than people: Bibles for moms, life hack study Bibles, biblical theology study Bibles, Bibles for young fathers. You can get Bibles that have two columns, Bibles with a single column and lots of space to journal, Bibles with pictures, Bibles without verses, Bibles clad in the finest leather, Bibles with positive verses highlighted in blue, Bibles with verses about the environment printed in green. The English language has an embarrassing number of fine translations, and we argue about which one is best based on factors that are relatively unimportant in the grand scheme of things.

So… how does one decide what is helpful in a Bible?

I am of the conviction that the best kind of Bible is one that emphasizes readability of the text itself, and if it includes helps like cross-references, footnotes, study notes, or whatever else, that these are carefully designed to be visually subordinate to the text. It is a real danger that we become more dependent upon the helps than upon our ability to simply read and reflect.

I do think some things can be genuinely helpful, so I was intrigued by Crossway's new ESV Creeds and Confessions Bible which includes three creeds, the Chalcedonian Definition, and 10 Reformation-era confessions and catechisms representing a vast swath of Protestant traditions. There is an introduction to all of them as well as brief introductory comments on each creed or confession. As is true of all Crossway Bibles, the overall package is sharp-looking and impressive; it looks great on the shelf. 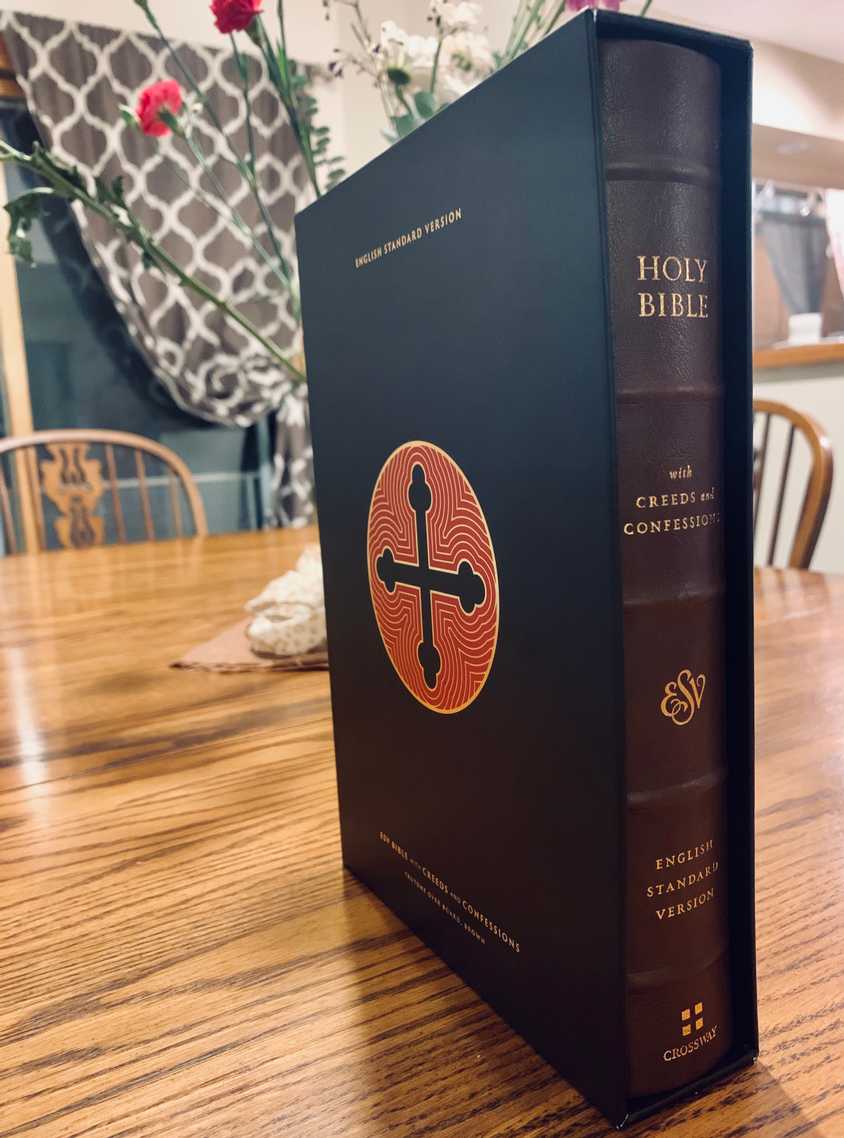 Why would you want creeds and confessions included in a Bible? For a few reasons: creeds are often used in worship, so it could be handy to have your own copy in your hands. Confessions form the basis of what a church believes, and while some Christians may have a familiarity with their tradition's confession, having it in the back of your Bible would make it easier for more Christians to easily read and reference it.

The biblical text itself is 10pt font in two columns with footnoted cross-references. It is honestly one of the less readable settings of the ESV text; Crossway has plenty of Bibles where they have invested a great deal of focus on the readability of the text, and this is not one of them. The margins are so narrow that I cannot hold the Bible without my thumb obscuring some of the text. It's a readable font and it's big enough to read comfortably, but on the whole the page looks like it would fit comfortably in an Encyclopedia.

While I like the overall concept and I think it would be a net good if more Christians were conversant with the creeds and their confessions and catechisms, I struggle to think of who this particular volume would be aimed at. Perhaps there is an occasion or two when a pastor or seminary student would benefit from having the confessions and catechisms of all major Protestant streams in one volume, but I can't imagine how that would be any use for the average Christian. 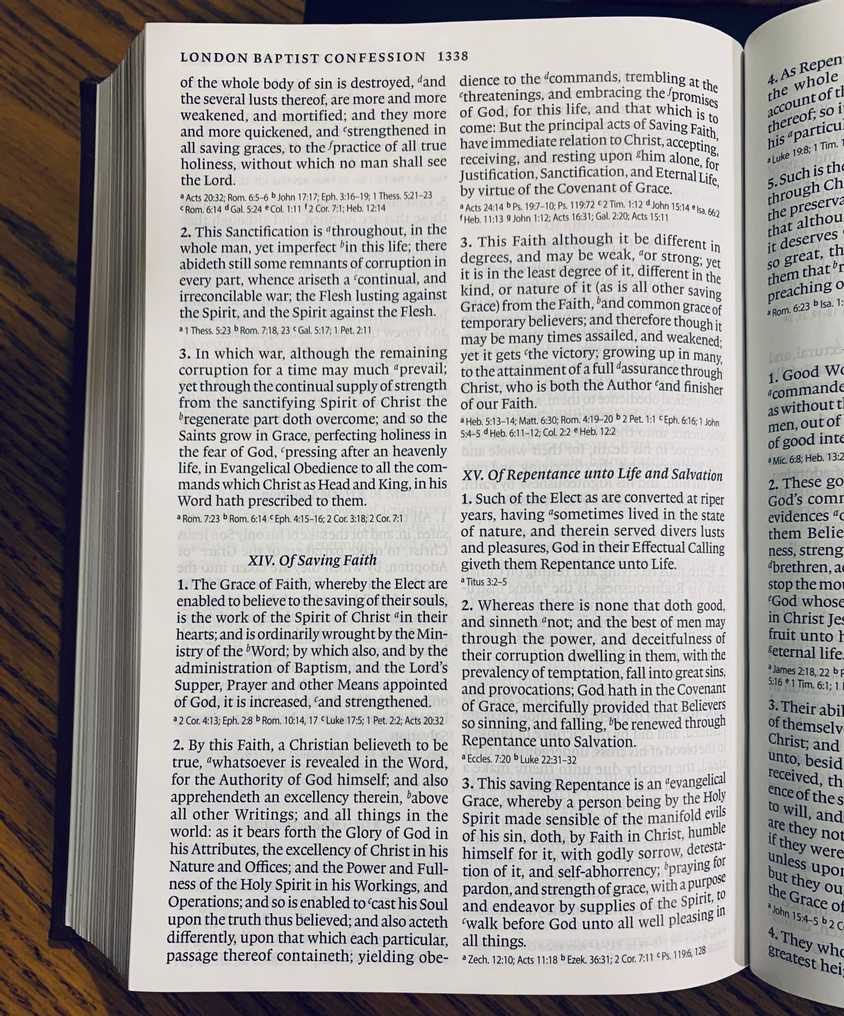 Perhaps a Reformed pastor might be curious to do a comparative analysis across Lutheran, Anglican, and Baptist confessions about a specific doctrine, but that doesn't really make the case for including all of them in a Bible. I myself am simply a church member, and I do regularly reference the 1689 confession, but the text is readily available online in readable, searchable formats, and it isn't compelling to me to sacrifice the layout and typography of the Bible itself just so that I can have my confession bound in with it when I already have it in my pocket on my phone.

What I think would be a more ideal version of this would be a single-column Bible with roomy margins and cross-references but with only the creeds. Or perhaps make it a family of Bibles and include the confession/catechism and other resources for just a single tradition, although it strikes me as fairly weird to have the "ESV Bible, Lutheran Edition" or "ESV Bible, Baptist Edition." That would be a lot harder to push enough stock through to make it financially worth it for the publisher, though.

This Bible is a real looker: it has a sharp design and it is built to last like every Crossway book. But the readability compromises of the biblical text combined with the shotgun approach of every Protestant tradition represented leaves me with the sense that I don't really know who I would recommend this to. It sounds good to me in theory, and I really want to like it, but I just can't get around to thinking this is a better investment than a good standalone Bible with creeds and confessions on your phone or in a separately bound volume.